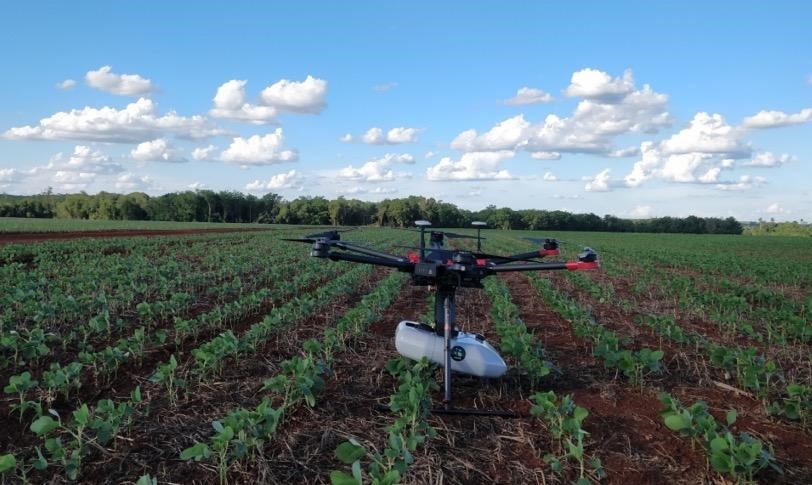 In a remote corner of Sumatra Island in Indonesia lies one of the largest sugarcane farms in Asia. At 35,000 hectares, it is almost half of Singapore and contributes to a substantial amount of domestic sugar consumption in Indonesia, with some of the highest production yields in the region.

This leading sugar producer is PT Gunung Madu Plantation (GMP). Like many agriculture producers it is under constant commercial pressure to increase crop yield and overall output. Weeds, pests and diseases can be a major showstopper and to mitigate these threats, GMP relies on its workforce of roughly 2000 full-time and 6000 seasonal workers to manage field operations. This includes regular checks for threats and the use of suitable pesticides to protect the crops.

The scouting process is painstaking and highly labor intensive. While it may be easy to spot weeds in the front yard, attempting to do the same with several thousands of hectares of farmland can be exacting. Each square meter needs to be checked regularly, particularly after planting and before harvesting, and failure to identify a pest or disease in time can be very costly.

By 2050, the world’s population is estimated to reach 10 billion, up from 7.5 billion today. Without a significant and sustained rise in agricultural output, a billion or more people may face starvation.

Precision agriculture is a quantitative farming approach used to increase farm output, based on managing field variabilities through the use of technology and data analytics. It identifies issues and recommends what the fields need for optimum health and productivity.

Today, the relative ease of access to data from sensors, satellites, low flying planes and drones, coupled with cloud computing, have driven cost efficiencies and increased affordability for farmers to employ precision agriculture technology solutions to help them grow better.

Taranis is a leading agriculture intelligence platform that combines high-resolution aerial imagery with Artificial Intelligence (AI), to help growers monitor fields in real time and make data driven decisions. It is able to augment readily available sensor data with images at sub-millimeter level, providing growers with effective oversight of fields at the individual leaf level, including the identification of specific pests. This is enabled by its proprietary and patented forward motion compensating image capturing hardware technology that allows it to take high-quality images while zipping by the field at a speed of up to 240km/hour on a plane or drone. 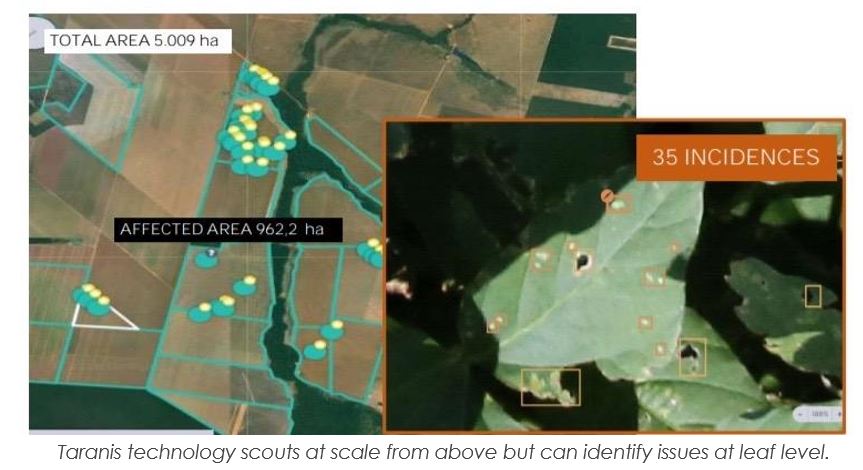 Taranis has accumulated a treasure trove of more than two million high resolution crop images, all of which have been manually and meticulously tagged to identify pest infestations and other crop issues. This unique and valuable data is then fed into deep learning models to generate its award-winning algorithms for plant health prediction. The algorithms, supervised by over 60 agronomists, can detect more than one million crop health issues, with over 85% accuracy and timely turnaround (within 72 hours from capture).

Taranis has a comprehensive suite of services available on its digital platform to help growers identify and resolve early signs of crop threats before they adversely impact yield. A fourth-generation farmer who grew up in a kibbutz, Ofir Schlam, CEO and co-founder of Taranis, is intimately familiar with the issues faced by farmers.

The goal might sound simple, but the means to achieve it is far from easy. It took Taranis several years to develop their proprietary technology suite of hardware and software intellectual property.

Taranis’ automatic motion-compensating imaging system (called a ‘pod’) houses its proprietary image capturing hardware. The pod is attached to drones or planes, soaring across fields to allow Taranis to gather 20x more data points or images, and 20x faster as compared to conventional field scouting. Each image captured is then analyzed by Taranis’ deep learning AI engine, which acts as an automated agronomist to provide clients with reports and recommendations, presented with an online dashboard for easy reference and follow-up.

Taranis has been particularly successful with monitoring high volume crops such as soy and corn and progressively, sugarcane. To date, Taranis has scouted more than two million acres and manages more than 20 million acres using its intelligence platform.

Taranis is clearly resonating with growers. It counts eight of the 10 leading retail and input companies among its clients, including Bayer, Syngenta, BSAF, Sumitomo, Helena and Nutrien. It enjoys healthy operational metrics such as high retention and SLA fulfilment rates, and sales growth exceeding 10 times in the last financial year!

In North America, Taranis has made inroads through partnerships with the large agriculture retail and input companies. In a recent interview, US crop consultant Erich Eller, President of ForeFront Ag Solutions, shared that they needed to scout more acres than usual this year but had no worry.

“We just hire it out with Taranis now. It’s not just some NDVI imagery you can’t make sense of. We were able to make real-time decisions on whether we should tear up a field or spot in.”

In Brazil, Taranis is an early entrant through Bayer, where the superiority of its technology has reinforced customer loyalty, evidenced by increasing contract value and upsell. Brazil has about 5 million agricultural entrepreneurs and 64 million hectares of arable land. However, about half of the industry does not utilize any digital technologies to facilitate farming activities. This presents Taranis with a distinct opportunity to invest and grow its market share in Brazil.

“Taranis is the most intelligent platform that I’ve ever seen, with a very competitive cost. It will promote the adoption of digital farming.” - Grower, Raizen sugarcane supplier

Earlier this year, Taranis announced its agreement with UPL Ltd., an agrochemical company and one of the leading agricultural solutions companies, for exclusive monitoring of UPL’s sugarcane acreage across Brazil, which is the largest sugarcane market in the world.

Fabio Torretta, CEO of UPL Brazil, said, “After several tests with the Taranis solution, we are absolutely sure that it presents unparalleled results and we are excited about this partnership and we intend to expand this project to other crops in the future.”

It was in hearing about Taranis’ good work in Brazil that GMP, the Indonesian plantation, decided to trial Taranis’ aerial scouting and diagnostic technology. The drone and pod were set up and 40 fields (170 hectares) were flown within a day, capturing over 550 images. Within 72 hours, the analyzed images and insights were delivered through the dashboard. And the results were impressive.

Taranis demonstrated its capability of accurately identifying pest and weed species, detecting instances of caterpillar damage and sugarcane common rust that were missed by scouters who had just combed the affected areas a day before. Taranis was even able to pick up insect problems beneath a full-grown sugar cane canopy!

After the successful trial, GMP is now a launch customer for Taranis in SEA for sugar cane. 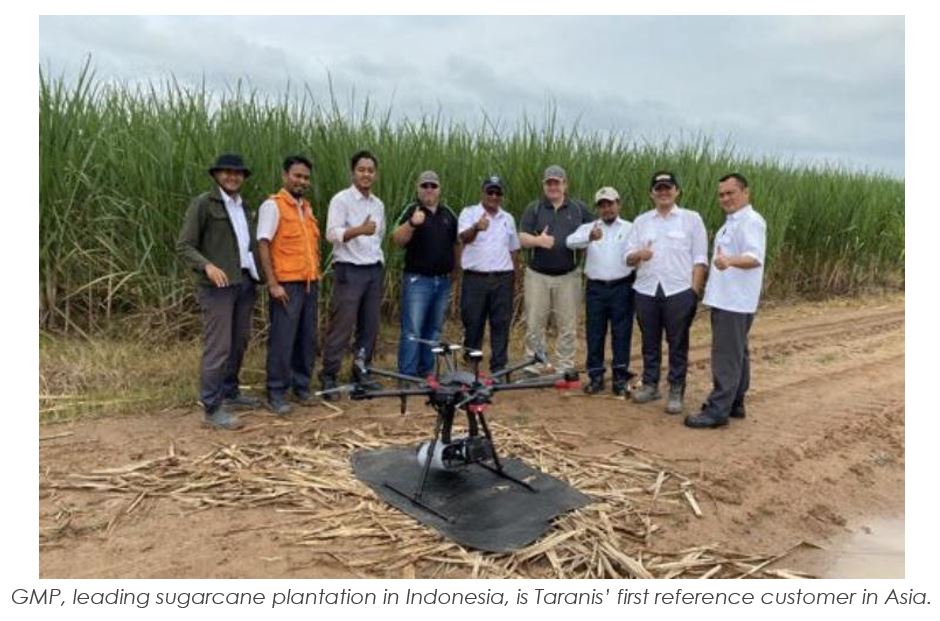 “We found that the level of resolution Taranis is able to deliver, combined with their highly-trained computer vision AI, helped to pick up data points that may have been missed by the naked eye as the visible effects of the pest or disease had yet to proliferate into a manner that was easy to spot,” GMP shared.

“We foresee plantations in Asia being able to drive informed decisions around the amount and location to spray postemergence chemicals, as well as the potential to greatly reduce human cost for surveying, through adoption of Taranis’ cutting-edge technology.”

On the top of its to-do list, Taranis wants to identify new pests or weed varieties for a wider range of crops, while cranking up its percentage accuracy on those it already has coverage. Currently, new crop varieties being explored/undergoing trials include canola, potatoes, wheat, barley and rice. Taranis is also launching new analytics modules, to support the diagnosis of crop problems through all stages of the planting process.

Further down its road map, Taranis is moving from responsive risk management to a more outcome-based, end-to-end approach. The aim is to complement diagnoses with automated predictive and prescription modules, for preventive care and greater confidence in achieving yield targets. In other words, Taranis would not only tell farmers what the current problems are, but also anticipate future problems and suggest how to solve them to improve outcomes.

Ofir added, “We could then send the prescription information to the drone, which would pinpoint the location(s) for application. Our aim is to complement diagnoses with automated prescription modules, offering an end-to-end prescriptive solution by 2022.” 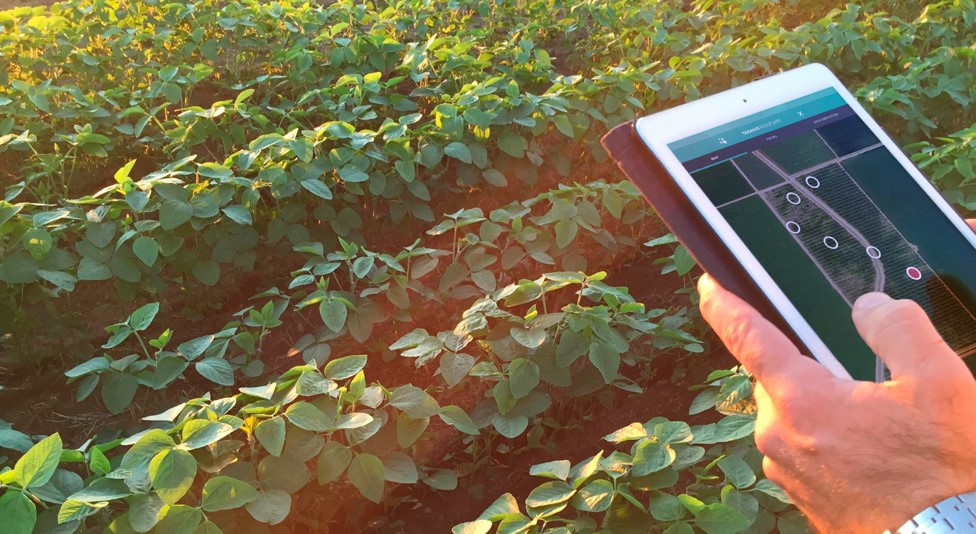 The digital agriculture market size is projected to grow rapidly, with Asia Pacific being the fastest-growing market. The opportunity to deploy Taranis’ technology in this region is immense. Many of the volume crops that Taranis specializes in are also grown in Asia, such as soy and wheat. In particular, wheat demand is booming in Asia so for existing producers, maximizing yield is important. Sugarcane is also grown in Thailand, Philippines, and further out in Australia and Papua New Guinea.

The big crop for this part of the world is of course rice, although that could be much further down the road as rice cultivation industrializes. As highlighted earlier, Taranis has started a trial in Paraguay – early results of monitoring rice plant health have been very promising, although it currently does not offer services for rice crops.

Armed with a war chest of USD 30M from a recent fundraising led by Vertex Growth and K3 Ventures, Taranis is poised and well positioned to offer its unique solution across more geography and crops.

MX Kuok, Managing Director of K3 Ventures added, “The combination of high-definition imagery and intelligence has the potential to change the game for global agriculture. We are excited to support Taranis as it cultivates existing and new markets.”

While the agtech space has seen plenty of innovation over the past several years, Taranis is differentiated by the scale and resolution of its scouting technology. With the swift delivery of insights and the accurate quantification and locations of crop threats, Taranis helps growers better manage fields effectively.

Vertex Growth is thrilled to partner with Taranis as they propagate their industry leading agriculture intelligence technology across the world.

EndoGastric Solutions Secures A New Round of Financing

U.S. based EndoGastric Solutions® has received a significant round of funding from investors including Vertex Growth Fund, to further accelerate commercialization efforts in support of the growing market demand for its Transoral Incisionless Fundoplication (TIF® 2.0) procedure performed with the EsophyX® device.

After reporting over 400% year over year revenue growth, Verbit is excited to announce it has raised an additional USD 60M Series C round. The round is led by Sapphire Ventures, with participation from existing investors Vertex Ventures, Stripes, HV Ventures and ClalTech, as well as new investor Vertex Growth.